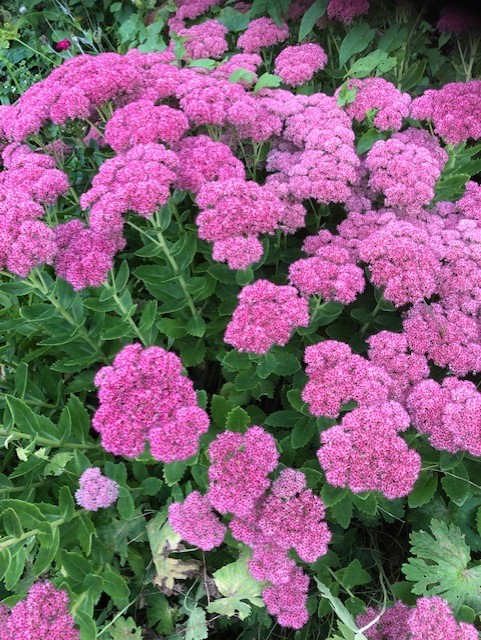 “The falling leaves, drift by the window, the autumn leaves of red and gold”…………. so sang Nat King Cole.

As I sit to write this my leaves are still green and hurtling across the garden with branches still attached. I know many people love Autumn but its not my favourite season at all and this year its too windy and wet to get outside and tidy things up at the moment. There are some good points about this time of year, the blackberries have been exceptionally fruitful and tasty and the weather was reasonably kind through September but October, so far, has been rather destructive for my liking.

According to folklore blackberries are no longer safe to eat after the 10th October. It was believed that the devil fell into a blackberry bush when he was thrown out of heaven on the 9th October and was so angry that he cursed the blackberries. Or perhaps a more scientific reason might be that spiders webs and insects are more apparent as the days get cooler therefore making the fruit less tasty.

Having put the 2021 show behind us and set a date for next year and having also achieved a reasonable hay-making season and passed Michaelmas Day on 29th September gardeners are now looking forward to putting the garden slowly to bed and tidying up the floppy summer excess. Clever/lucky gardeners are also gathering apples, pears and quince ready for over-winter storage whilst some of us are wondering what to do with the enormous glut of courgette/marrows we have accidentally grown. Recipes abound for courgette cake, courgette soup, courgette chutney (a winner at this year’s show) roast courgette ratatouille, courgette spaghetti ….. I could go on. I did manage to pickle cucumbers from this year’s crop and very tasty they are and some quince jelly is on the agenda too. Quinces were believed by some to be the Forbidden Fruit from the Garden of Eden but that didn’t stop them being used to make various preserves, although they do need to be cooked to be edible in this country.

Another usual job for October is the digging over and fertilising of flower beds and veg plots as they become vacant. I made some stinging nettle fertiliser (mature nettles steeped in a butt of rainwater for a month, strained and applied with ten parts of water) earlier in the year which I’m going to use up but I will need a clothes peg……….to put on my nose, it’s very smelly.

Brussel sprouts, turnips, swedes, carrots all come into their own at this time of year too, not forgetting pumpkins grown to decorate houses at Halloween and my favourite, the butternut squash, which makes delectable soup after roasting with garlic and blitzing with veggie stock.

The rather attractive marigold (Calendula officinalis) is still showing its colour along with some stunning red hot pokers and very striking sedum. The marigold was, at one time, considered to be one of the most holy plants by the Hindus and garlands were hung around the necks of the gods. Marigold is a cure-all in the garden and flowers in nearly every month of the year if you are lucky. It is believed to be a great companion plant for almost everything and supposedly kills off bugs and white fly. But beware it also has a reputation as an aphrodisiac and apparently has the power to make some see fairies.